All shapes are original drawings/paintings that
I have created in ink, watercolor, pastel, or alkyd oil and then cut and glued in place.  All work is done on real gessoed heavy paper.  All materials and techniques are archival quality and the finished piece can be mounted on wood panel and framed as a traditional oil painting or it can be matted and framed as a watercolor painting.  Building forms in collage  style is satisfying to my 3-D background for handling materials and it permits exciting challenges to create color and texture ideas. 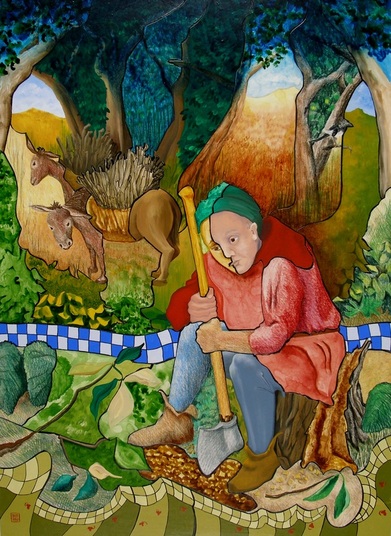 Depression, collage, 28 ½” x 20 ½”, 2005
This is really mixed media as prismacolor, pastel, watercolor and alkyd oil were all used.  I like the detail work on segments that abruptly end with the cut edge; as in life where many pieces complete the whole.  This piece references an elder tale that all tell of the struggles in life as we try to gain wisdom with self-confrontation, self-reformation and self-transcendence.  This tale is The Woodcutter and a shortened version of the tale has an old woodcutter tired of all his labors with little reward and refuses to get out of bed one morning.  Later in the day a stranger asks hie wife if he could rent the two mules in the yard.  The stranger is a thief and fills the mules bags with treasure.  As the thief travels into the woods to bury the treasure he hears horses of the search party looking for him and he abandons the mules and runs deep into the woods.  As the day wears on the mules find their way home and the wife discovers their load of treasure.  After giving half the treasure to their two sons the woodcutter and his wife spent the remainder of their lives in comfort.

This elder tale and most others I work with come from the work of Dr. Allan B. Chinen who has two published books on the subject:
In The Ever After, Chiron Publications, 1989.
Beyond The Hero: Classic Stories of Men in Search of Soul, Xlibris, 1993. 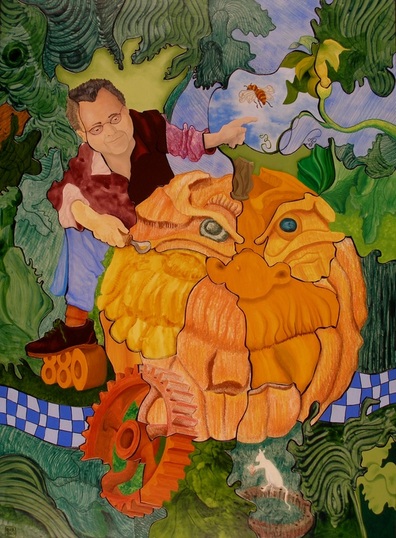 The Arrival of Billy Curmudgeon, collage, 28 ¼” x 20 ¾”, 2005
This piece was done when my friend Pat Moser was active in carving giant "Grumpkins" that weighed over a thousand pounds.  Pat carved these pieces in places around the world and was even featured on the front page of THE WALL STREET JOURNAL.  This piece is full of symbolism for Pat including the white rat Twichy that he said was like that part of his brain that was being effected by MS.  Pat died in 2010 due to numerous health issues and this piece is owned by his twin sister Mrs. Patricia Moser Coates.  Besides a most knowledgeable friend Pat was my webmaster. He would be encouraging of my stumbling along creating this site. 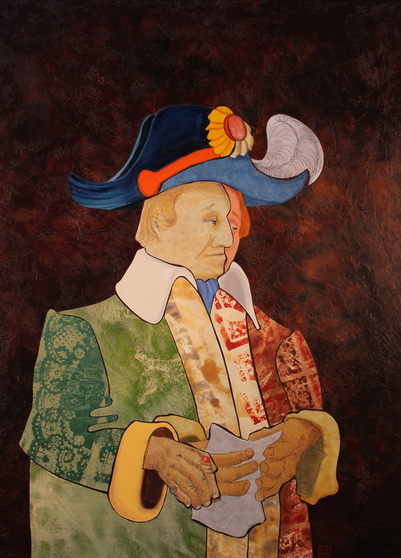 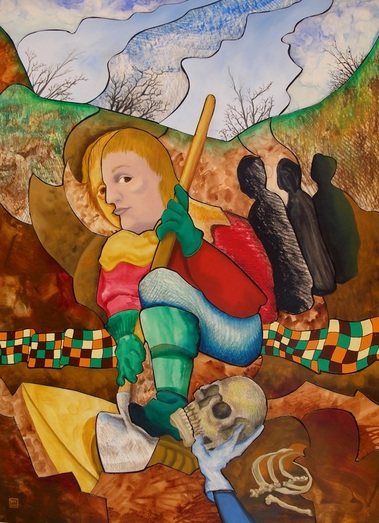 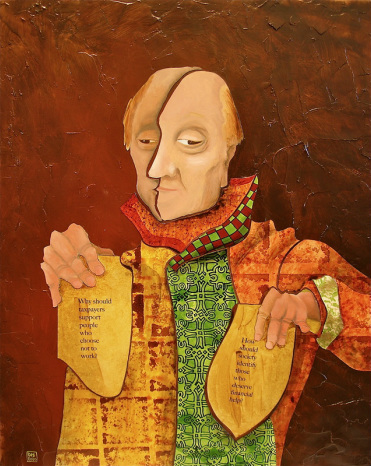 Taxpayer Support, collage, 19” x 16 ¾”, 2012
This is the first of a series with the theme of opposing views in our culture.  The text in one hand reads: Why should taxpayers support people who choose not to work? The other hand: How should society identify those who deserve financial help? 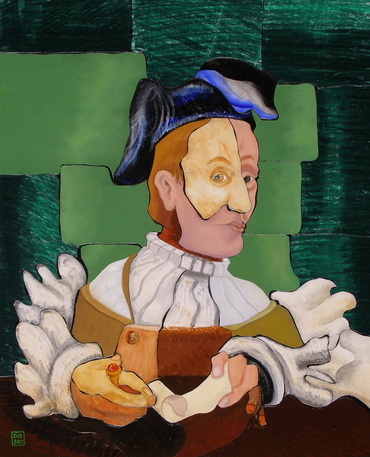 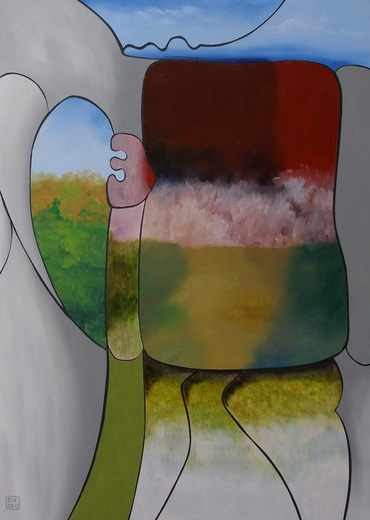 Memory, In the Distance, collage, 26" x 19", 2013
This is the first piece that I did working with the way our mind can be directed in particular directions but can't stop gathering images that may or may not be part of the original idea.  Our memories are tricky things; sometimes we think we know all about the subject but then again we aren't quite sure. 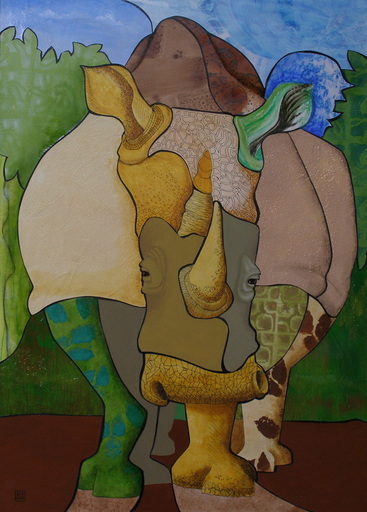 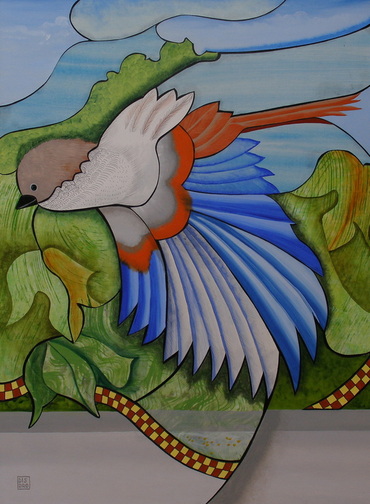 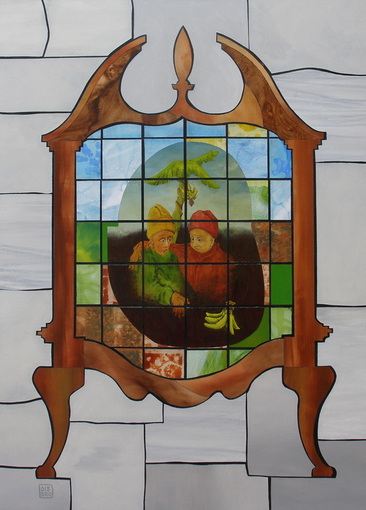 Highboy, 26" x 19", collage, 2014
This is another reference to the elder tales that I find so fascinating.  The Old Alchemist

Synopsis by William Disbro, created  from: In The Ever After by Allan Chinen, Chiron Publications, 1989.

The theme is wisdom and Chinen writes about five incredible pages explaining the symbolism in this tale.

The daughter’s husband neglects everything as he searches for the secret to produce gold.  Things are desperate when the daughter asks her father to speak to his son-in-law.  The husband meets the father expecting to be severely chastised.  The father confides that he too spent his youth searching for the secret, and at last he found it.  In great excitement the son-in-law asks how it is done.  You need two pounds of the silver dust found only on banana leaves but such an arduous task is now beyond me, the father said.  Plans were immediately made to start growing banana trees.  The father even gave some money to help purchase land and trees.

For two years the son-in-law toiled ceaselessly to plant more and more trees and gather the precious silver dust.  At last he had the two pounds and he met with the father to find out how to convert to gold.  The father asked his daughter what she had done with all the bananas and she said she had taken them to market each day.  When asked what she did with the money from sales she replied that was the money they lived on.  And asked if there was any extra she showed her father a small sack of gold coins.  The father picked up a handful of dirt and held it out to his son-in-law and with the other hand held out the gold coins.  From this to this, he said.  And the son-in-law saw the wisdom of his efforts with the banana trees and resolved to work even harder to grow bananas. 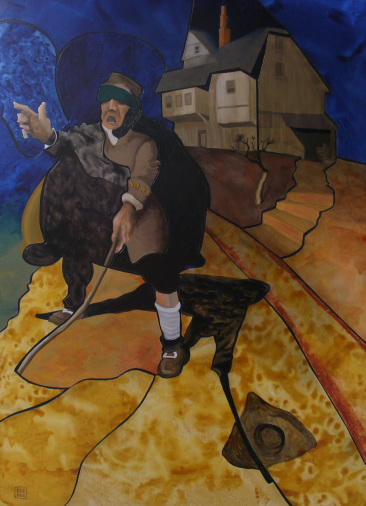 Remake: Blind Pew, 26" x 19", collage, 2014
The "Remake" series selects favorite images of mine and lets me do them in my style of collage work.  The original painting was was done by the great illustrator N.C. Wyeth in 1911 for Robert Louis Stevenson's Treasure Island. 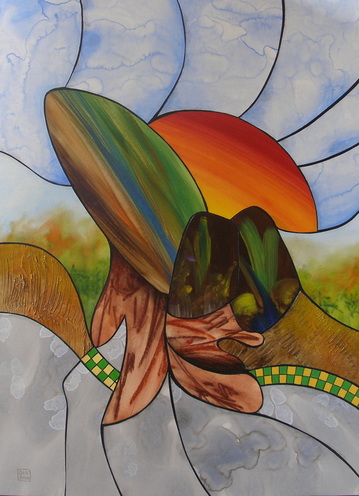 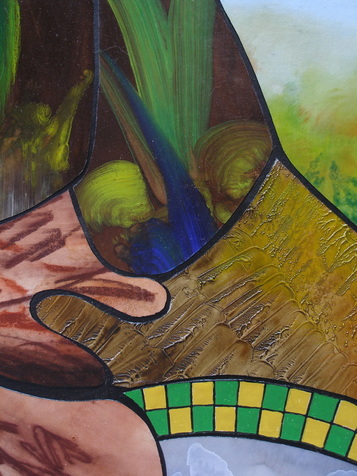 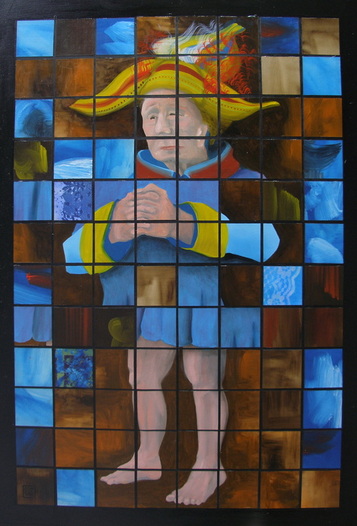 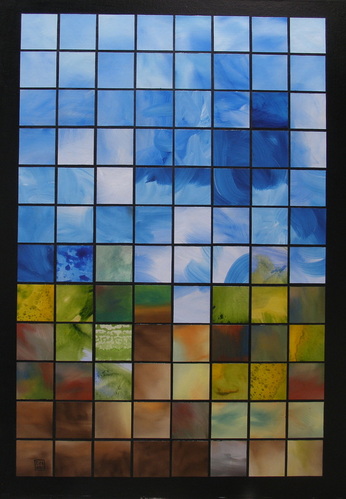 Cloud Watch, collage, 26" x 19", 2014
This is the first piece with no representational shapes - just abstract painting shapes - but the composition is a landscape.  Very interesting contrast between the abstract colors and lines and the overall impression of organization. 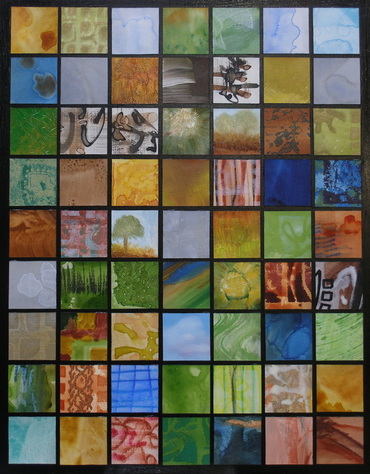 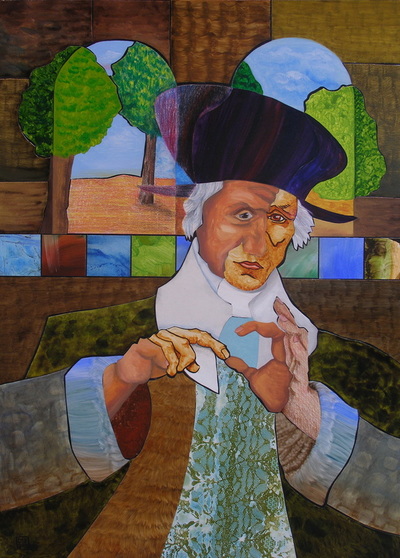 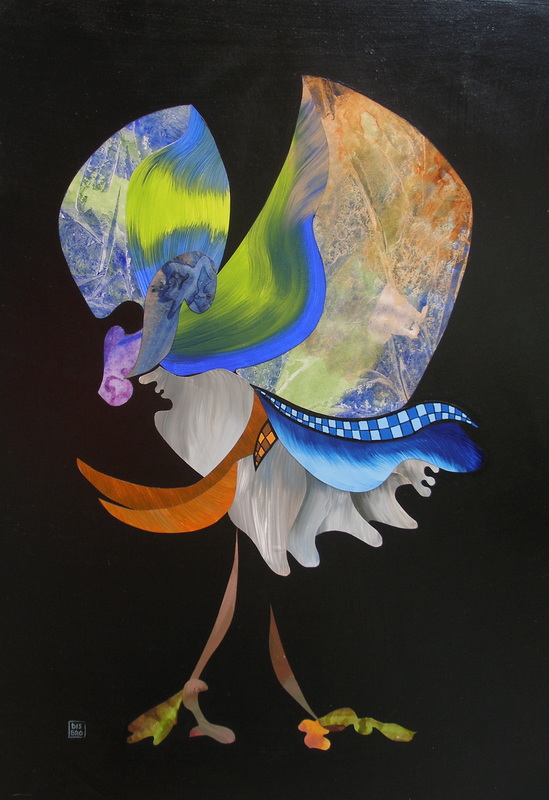 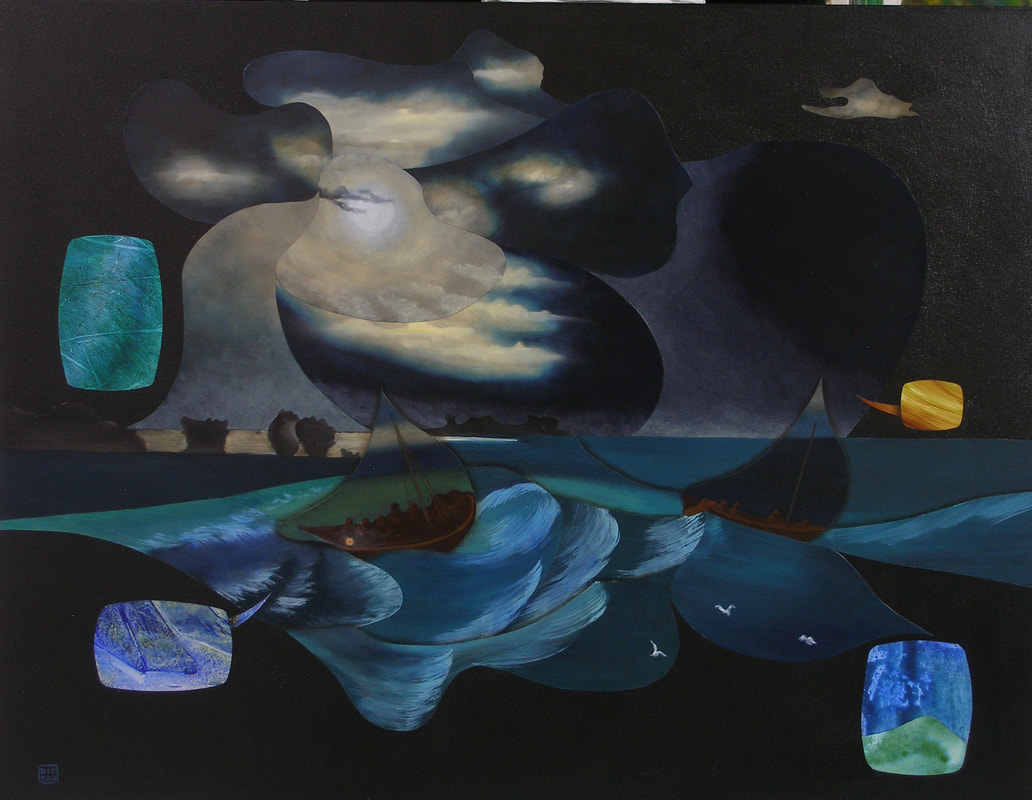 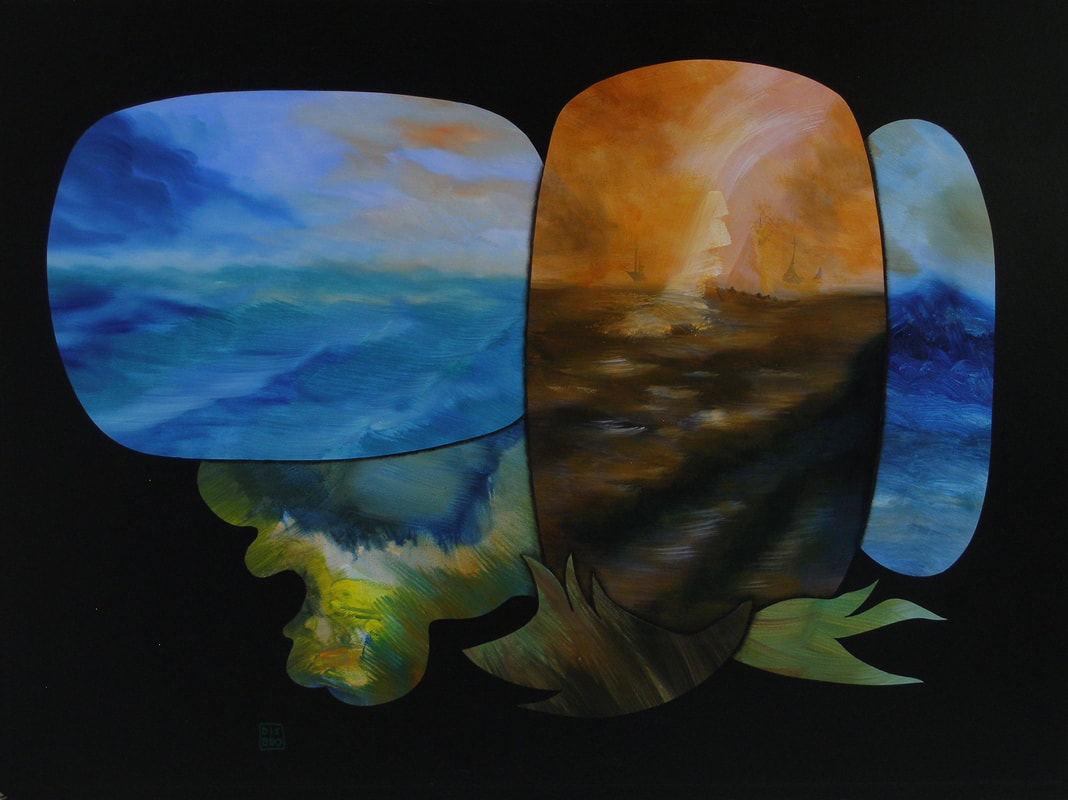 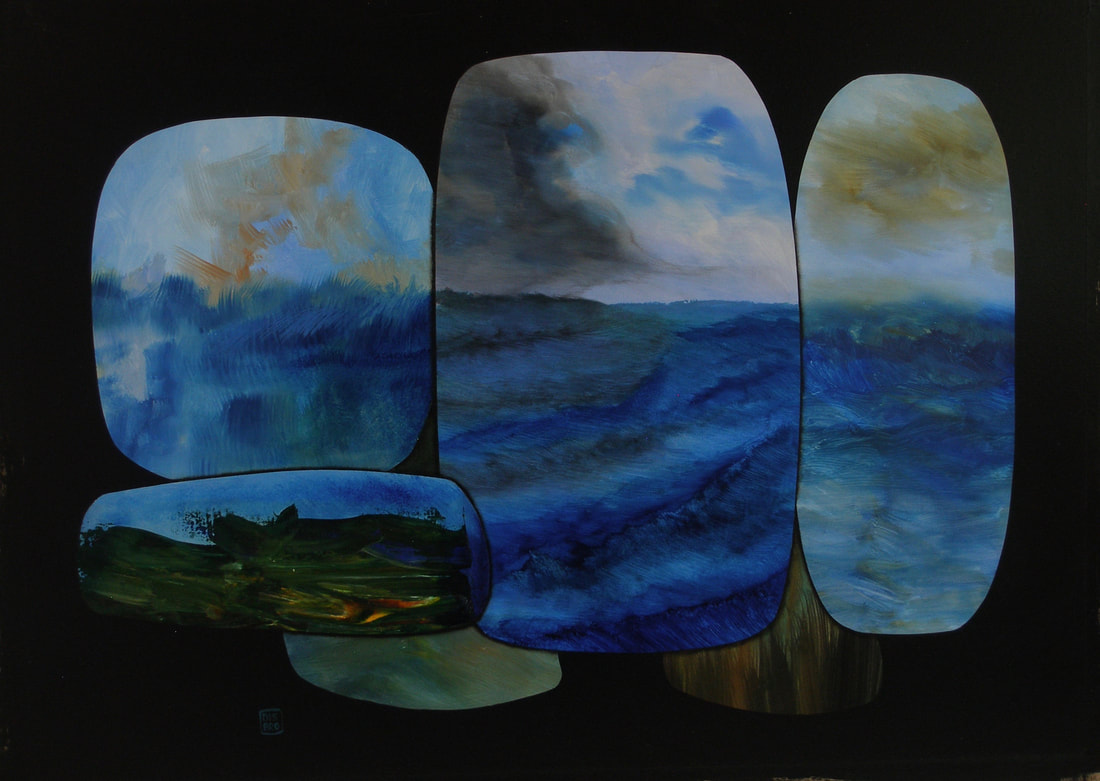 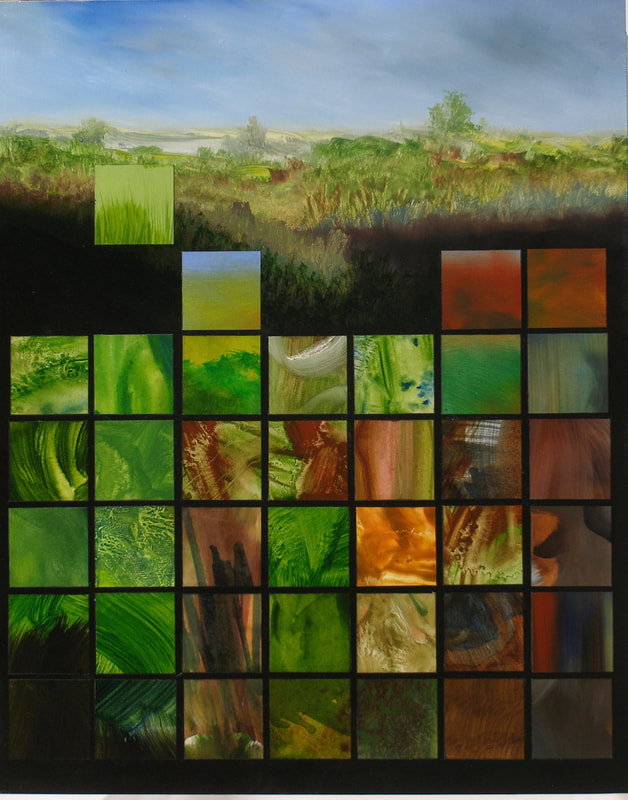